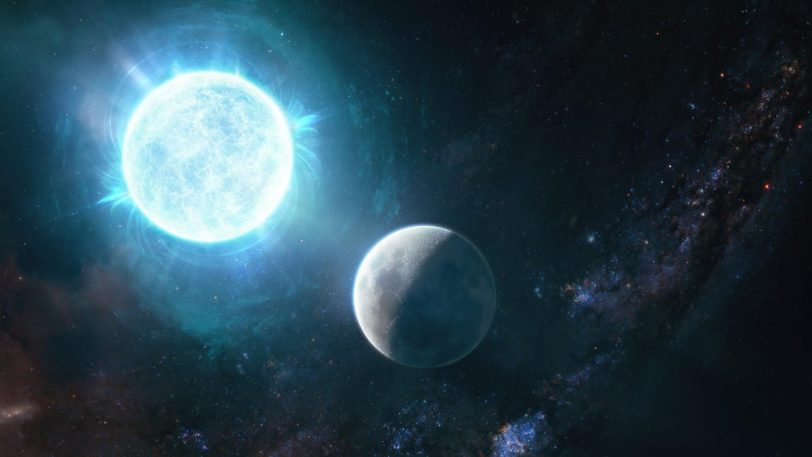 What is slightly larger than our Moon but nearly 1.4 times the mass of our Sun? ZTF J1901+1458, one of the tiniest white dwarf stars ever discovered. A series of ground- and space-based telescopes observed the dying husk of a sun-like star only 133 light-years away.

In a study published in the journal Nature, researchers detail the discovery and characteristics of ZTF J1901+1458, which is so named because it was spotted by the Zwicky Transient Facility, a sky survey using the Palomar Observatory in California that searches space for any objects with sudden changes in brightness. It’s quite an extreme star.

When stars eight times the mass of our Sun

or smaller reach the end of their lives, white dwarfs form. As they run out of fuel, they begin to collapse; but somewhat paradoxically, this initial collapse causes the star to swell to monstrous sizes and become a red giant (like the famous star Betelgeuse ).

This process also causes the star to cool down slightly and its core contract, which releases a massive amount of energy, causing it to grow even larger. However, it begins to lose its outer layers, leaving only an extremely dense core behind. A white dwarf.

The husk of a blown-out star was what the research team saw in the ZTF records. They used data from the European Space Agency’s Gaia satellite, the Keck telescope in Hawaii, and NASA’s Swift observatory to better understand its characteristics. After analyzing J1901+1458, they realized it was special: It was rapidly rotating and appeared to be nearly as massive as a white dwarf can be.

the white dwarf was formed by two stars that danced for billions of years. They both evolved into white dwarfs before merging to form the new, much more massive star.

“We caught this very interesting object that wasn’t quite massive enough to explode,” said Ilaria Caiazzo, an astrophysicist at Caltech and lead author of the new study, in a press release. “We are truly probing how massive a white dwarf can be.”

It has also been described as the smallest white dwarf discovered, but that title might go to another object believed to be a white dwarf, known as RX J0648.0–4418.

So what will happen to the white dwarf now?

“This is highly speculative, but it’s possible that the white dwarf is massive enough to further collapse into a neutron star,” said Caiazzo. Usually neutron stars form when huge stars collapse, but it’s speculated that about one in 10 might be formed from the collapse of a white dwarf.

That’s because strange things are happening in a white dwarf’s super-dense core. Caiazzo describes a subatomic process in which electrons are captured and neutrons are formed. As more electrons are removed, the core approaches collapse and eventually becomes a “zombie” neutron star, one of the most unusual and mysterious cosmic bodies in the universe.

“There are so many questions to address,” notes Caiazzo.

READ MORE: Scientists Watched a Star Explode in Real Time for the First Time Ever (Video)