Let’s for a moment imagine that space travel has become a daily round. Which planet would you like to visit first? Hot Mercury, which is closest to the Sun? Charming Venus or the red Mars – one that is most familiar? So let not take big risks and choose a Planet on which we will feel most “comfortable”.

Mars – four seasons, 24-hour day, atmospheric clouds and mists, tolerable temperatures – this must surely be the first stop in the cosmic journey.

Before going to the Red Planet, however, nice to know a few important things. To get there, you will be required little more than five Earth’s months  – so make sure you have what to do and your companions are pleasant enough. Also remember that it is best to travel when the planet is closest to us, i.e. in opposition to Earth (the three bodies are on the line, the Sun is on one side of us, Mars – the opposite). This happens roughly every two years. And guest what –this month is the right one to travel to Mars, so don’t spend more time and start packing! Perhaps you are familiar with the fact that the Red Planet has extremely unpredictable weather. But at the same time the temperatures are most similar to Earth than any other planet in the solar system. Therefore I recommend summer when temperature reach favorable 20 degrees Celsius. Visitors during the winter season must be prepared to minus 140. At the expense of at the same time you expect a remarkably beautiful polar caps covered with dry ice. 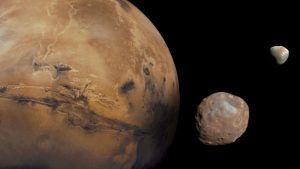 Note the two moons around the planet, and its yellowish-pink sky. Unusual, isn’t it? This is because the atmosphere is filled with tiny particles of iron oxide, that reflect light in a specific way. Surely you noticed and significantly lower gravity – only 38% that on Earth. So if you weigh 100 kilograms home on Mars you will be only 38 kg. Do not take it literally as Fat-losing Center  in which melt weight – of course, the mass will not change on any planet in the universe you visit, just the gravity is different.  And imagine what you can do with your Earth’s strength on Mars – will throw objects twice as far and jump three times higher.  After delight the view and enjoy the new capabilities you can call relatives and friends to  boast that the interplanetary trip went well. Spend at least two hours of your  free time as to travel a simple “Hello, how are you?” From Mars to Earth will need  25.4 minutes. 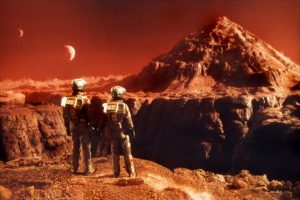 Ok, now look trough the window and If no dust storms or 8 kilometers high tornadoes, you  can start exploring some tourist attractions on Mars. Here everything is megalomaniac proportions. The mountains are higher than Mount Everest and canyons – deeper even than the Grand Canyon. So get ready for some really deeply touching views.  Start from volcanoes. They are approximately 100 times higher than those on Earth because there is no tectonics  plates on Mars and their “growth” is not disturbed by the movement of the surface. Special attention is Olympus Mons (lat. – Mount Olympus) – the giant volcano in the solar system. It height is 27 kilometers and extends over an 700 km. More courageous  ones of you can even try to climb without worry in the meantime can erupt, as has long been inactive. Make sure you have seen and Valles Marineris (lat. – Valleys of Mariner) – one of the largest canyons in general – long approximately 5 thousand Km and 6 km deep- this is about the same distance from New York to LA. Staring into the abyss, try to find traces of erosion, to make sure yourself that on the Red Planet once was water. 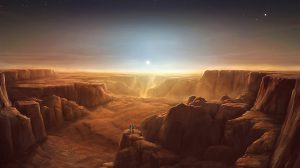 The giant dunes also deserve your attention, especially if you’re a fan of extreme sports such as skiing on sand. They were formed as a result of low gravity and air pressure and some reaching almost 90 meters with “waves” over 6 meters. Do not miss The Face! You’ve heard the stories about this unusual rock formation. If the Sun illuminate it from a certain angle, seen from above, it looks like human face. Is this a work of aliens? Was ever life on Mars? Decide on the spot. Besides you may be able to answer  these two eternal questions. 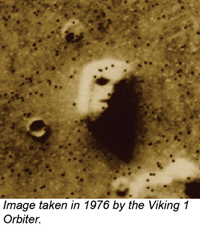 Anyway if you feel not ready yet to go on Mars, you can get you telescope and watch it safe and sound form your back yard. Now is the right moment to do this. It’s visible all night long!

5 thoughts on “People Going on Mars – a Tourist Guide”