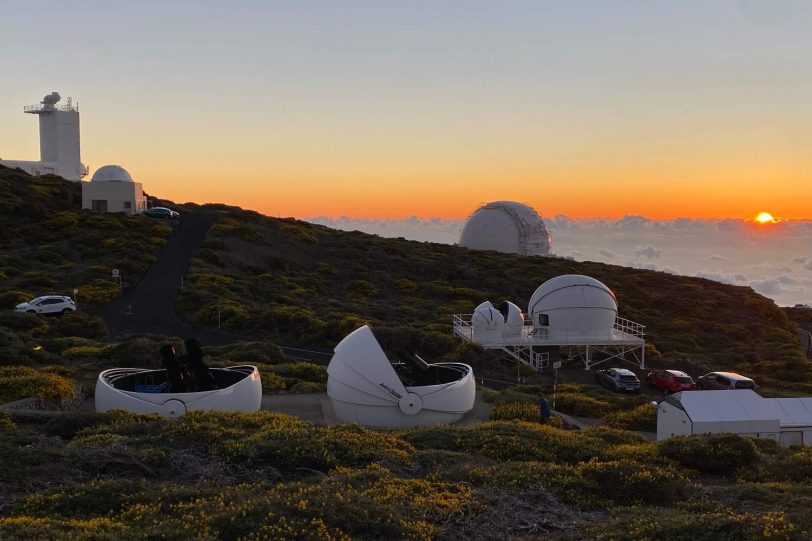 A brand new telescope will be the first to look for colliding black holes and neutron stars in search of gravitational wave sources.

Gravitational waves, or ripples in spacetime caused by the universe’s most energetic collisions, were discovered in 2015 by the Laser Interferometer Gravitational-Wave Observatory (LIGO). So far, tracking the origins of these waves has proven difficult.

to sensing the vibrations of a road’s surface after a truck passes but not being able to see the truck. It’s nearly impossible to know where to look in the vast universe with optical telescopes to find the sources of these vibrations. The Gravitational-wave Optical Transient Observer (GOTO) is a new telescope that aims to change that.

“There are fleets of telescopes all over the world available to look towards the skies when gravitational waves are detected in order to find out more about the source,” Professor Danny Steeghs, a head of the astronomy department at the University of Warwick in the U.K. and GOTO’s Principle Investigator, said in a statement.

. “But as the gravitational wave detectors are not able to pinpoint where the ripples come from, these telescopes do not know where to look.”

in collaboration with LIGO and other gravitational wave observatories such as the European Gravitational Wave Observatory, will scan the entire sky every few days from locations in the Northern and Southern Hemispheres.

The telescope’s computer will analyze the images using sophisticated algorithms to look for sudden and intense brightenings in specific parts of the electromagnetic spectrum. Collisions of the universe’s most massive objects, black holes and neutron stars, could cause such brightenings. Neutron stars are the remains of supernova explosions, which occur when giant stars die. The explosions leave behind extremely dense remnants that may only be a few miles wide but have the mass of the entire sun.

the explosions produced by the collisions of these cosmic behemoths are also extremely fleeting, making the search process following the detection of gravitational waves difficult.

Astronomers would know where to point other, more powerful telescopes to study the cataclysmic events in greater detail if they combined gravitational ripple detection with quickly processed images from GOTO.

“[GOTO] was always envisaged to be … arrays of wide-field optical telescopes in at least two sites so that these could patrol and search the optical sky regularly and rapidly,” Steeghs said.

“This will allow GOTO to provide that much-needed link, to give the targets for bigger telescopes to point towards.”

GOTO was created by a group of researchers from universities in Australia and the United Kingdom. The first array was recently tested at an observatory in La Palma, Canary Islands, off the coast of northern Africa. According to the researchers, the robotic observatory is made up of 16 separate 16-inch (40-centimeter) telescopes clustered in two arrays that share 800 million pixels of resolution. A similar array will be installed soon at Australia’s Siding Spring Observatory near Sydney.

should be ready for the next LIGO observing run, which is scheduled to begin next year. LIGO engineers have improved the instrument’s sensitivity since the first gravitational wave detections in 2015, and it is now expected to detect gravitational waves from neutron star mergers as far away as 522 million to 620 million light-years from Earth. Larger and more violent events, such as black hole collisions and mergers, should be visible to LIGO from even further away.

If astronomers can find the sources of these gravitational wave signals, they will be able to characterize them, measure their distances, and study their evolution, according to the researchers.

“The hope is to catch the event quickly, then follow it as it fades, and also to trigger an alert to other, bigger telescopes so they can all collect more information and we can build a really detailed picture of these astronomical phenomena,” Steeghs said. “It is a really dynamic and exciting time. In astronomy we are used to studying events which are millions of years old and aren’t going anywhere – this is a fast-paced, very different way of working where every minute counts.”

READ MORE: Scientists May Have Detected a Signal That Could Change Astronomy Forever