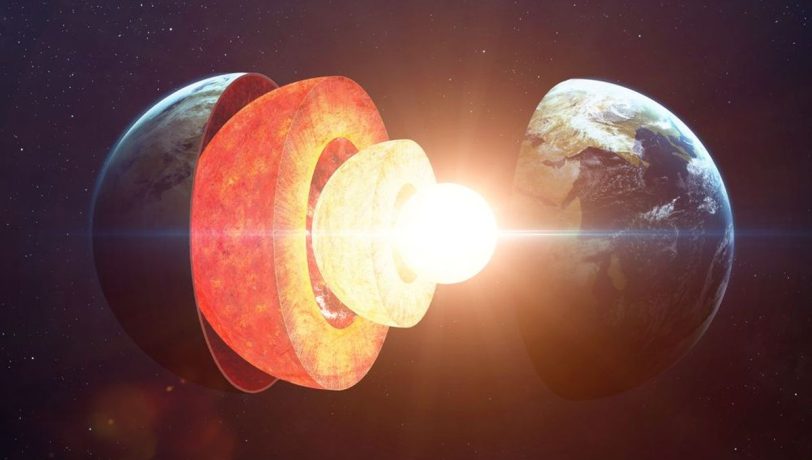 According to a new study, the swirling solid ball at the center of Earth’s inner core appears to have recently paused and may even now be rotating in the opposite direction.

A pair of Chinese scientists have been studying seismic wave data from earthquakes that have blasted through the Earth’s inner core to investigate the movements of the mysterious innards.

They can learn about what’s going on within Earth’s inner layers by observing changes in these waves, which are far deeper than any drills or instruments can reach. Their data shows the evolution of seismic waves over many decades, beginning with Alaskan records in the early 1960s and ending with recordings collected in 2021.

The data showed that parts of the core that had previously shown clear signs of variation suddenly showed very little variation around 2009, implying that the inner core rotation paused.

They also detected significant changes in the waves beginning around the early 1970s, indicating that this pause was part of an oscillation that occurs every seven decades or so, when the inner core gradually reverses direction.

The inner workings of the Earth are a mystery. Its structure is divided into four major layers: the outer crust, the mostly-solid mantle, the liquid metal outer core, and the final inner core made of iron and nickel.

Because the liquid outer core separates the inner core from the rest of the solid Earth, it can rotate at a different rate than the Earth’s surface. The magnetic field generated in the liquid metal outer core, as well as the gravitational effects of the mantle, govern the spin of the inner core.

However, theories about the movement of this inner core differ. Many researchers previously believed that the planet’s innermost geological layer rotates at a slightly faster rate than the rest of the planet, but this is now thought to be less straightforward.

Last year, research suggested that the Earth’s inner core oscillates, gently swaying and swirling in a cycle. Interestingly, they discovered some unusual data from the early 1970s, which is similar to the new study.

The results revealed that the inner core moved slowly in a different direction between 1969 and 1971, sub-rotating at least a tenth of a degree per year, compared to the direction it moved between 1971 and 1974.

“From our findings, we can see the Earth’s surface shifts compared to its inner core, as people have asserted for 20 years,” John E. Vidale, study co-author and Dean’s Professor of Earth Sciences at USC Dornsife College of Letters, Arts and Sciences, said in a statement in 2022. “However, our latest observations show that the inner core spun slightly slower from 1969-71 and then moved the other direction from 1971-74.”

Although the strange motions of the Earth’s core may appear to be far away from us, their effects on life above the surface are real.

The magnetic field of the planet is influenced by Earth’s core, specifically its outer core. The North Magnetic Pole has moved 2,250 kilometers (1,400 miles) across the upper reaches of the Northern Hemisphere from Canada to Siberia since it was first scientifically documented in the early nineteenth century.

The rate of this movement increased from less than 15 kilometers (9.3 miles) per year between 1990 and 2005 to around 50 to 60 kilometers (31 to 37 miles) per year. This flux is most likely the result of two magnetic “blobs” of molten material in the planet’s interior, which caused a titanic shift of its magnetic field.

The new study was published this week in the journal Nature Geoscience.

All of the most latest and intriguing Space and Astronomy products in one place! In our new Space Store from your favorite website, you’ll find an extremely wide range of items and gift ideas organized into various categories.