Our home galaxy is not the thin, clean spiral we had envisioned. Researchers created the first 3D map of the Milky Way galaxy and figured out what makes it warped and twisted.

So, we now know that the Milky Way isn’t flat.

Scientists from the National Astronomical Observatories of the Chinese Academy of Sciences (NAOC) and Macquarie University in Sydney, Australia have published a new study in the journal Nature Astronomy revealing an unprecedented 3D map of the galaxy we live in.

The scientists used the locations of 1339 ‘standard’ stars to map the outline of the Milky Way galaxy called Classical Cepheids. These are young stars which are four to 20 times larger than our Sun and up to 100,000 times as bright.

Until now, scientists have maintained the idea that our galaxy was a flat, spiral, home to around 300 billion stars.

Our Solar System occupies a small, insignificant spot on one of the galaxy’s spiral arms.

Now, a new study has revealed that the shape of our galaxy is much stranger than previously thought. 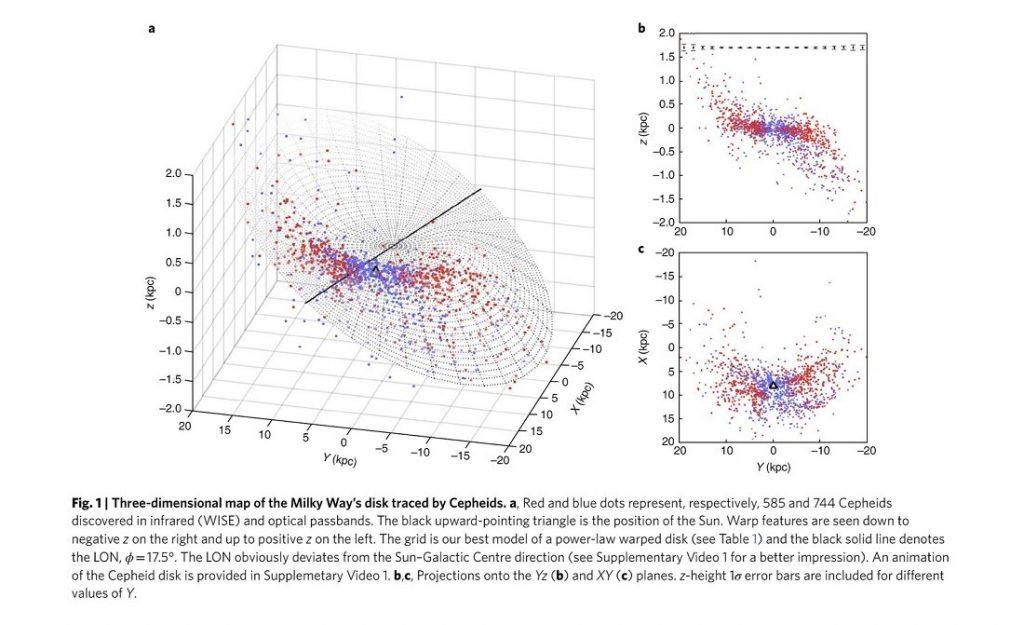 Astronomers have revealed that in reality, the Milky Way Galaxy appears to be warped, and becomes increasingly twisted the further away stars are from its galactic center.

Scientists maintain that our galaxy has become warped due to the torque created from the spinning galaxy’s densely packed inner disc of stars.

“We usually think of spiral galaxies as being quite flat, like Andromeda which you can easily see through a telescope,” explains Professor Richard de Grijs, a co-author and astronomer from Macquarie University in Sydney, Australia.

The Milky Way for example, when observed from far away looks like a massive, thin disk of stars, that spin around the central region every few hundred million years.

The 300 Billion stars, as well as the elusive dark matter act as a gravitational glue, that holds the galaxy in a compact structure.

The galaxy is ‘warped’ due to the hydrogen clouds in the outermost parts of the Milky Way.

And that’s due to the change of gravitational pull, far from the Galaxy’s inner region, causing the Milky Way’s nearly found ‘s-shaped warp’.

“It is notoriously difficult to determine distances from the Sun to parts of the Milky Way’s outer gas disk without having a clear idea of what that disk actually looks like,” said Dr. Chen Xiaodian, a researcher at NAOC and lead author of the article.

“However, we recently published a new catalog of well-behaved variable stars known as classical Cepheids, for which distances as accurate as 3 to 5% can be determined.”

But the twisted nature of the Milky Way isn’t unique to our home galaxy.

Astronomer shave revealed observing dozens of other galaxies in the universe with similar progressively twisted spiral patterns in their outermost regions.