Home » Educational » The Trail of Starlink Satellites was Captured by the ISS. How Can We Watch These Satellites?
Educational | Humans and Space

These days, in the evenings with clear sky, many people had the opportunity to see the “caravans” of Starlink satellites.

The advent of SpaceX’s Starlink satellite network, which will consist of many thousands of satellites, can seriously hinder astronomical observations.

How can Starlink satellites be found in the sky?

When the weather is cloudless, you can watch satellite in the night sky. Satellites are often visible as a bright point of light moving in front of the stars.

To increase your chances of seeing this “caravan” of satellites, use some satellite tracker. Several websites already offer tools to help each observer when and in which direction to look to see or avoid these satellites. Here is one of these trackers which I like a lot because is very simple to use – https://findstarlink.com/

Now you can see the satellites not from below, but from above through the ISS.

While photographing the Aurora from above the Indian Ocean, astronauts on the ISS accidentally captured Starlink satellites as well.

According to the meta data provided by NASA, the photo was taken on April 13th using a Nikon D5 and 50mm lens at 2.5 seconds, f/2.8, and ISO 3200. At first, it’s hard to spot the trail of Starlink satellites, but once you see them you can’t UN-see them.

Here’s the high-res image from NASA (click for full resolution):

And here’s a close crop where we’ve highlighted the little trail of satellites:

This photo is the first instance we’ve seen of the satellites appearing in a photo taken from the ISS, but we’ll no doubt see many more. 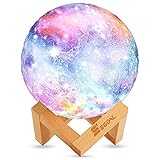