Home » Educational » Did our Solar System Form in Bubbles Around Massive Star? 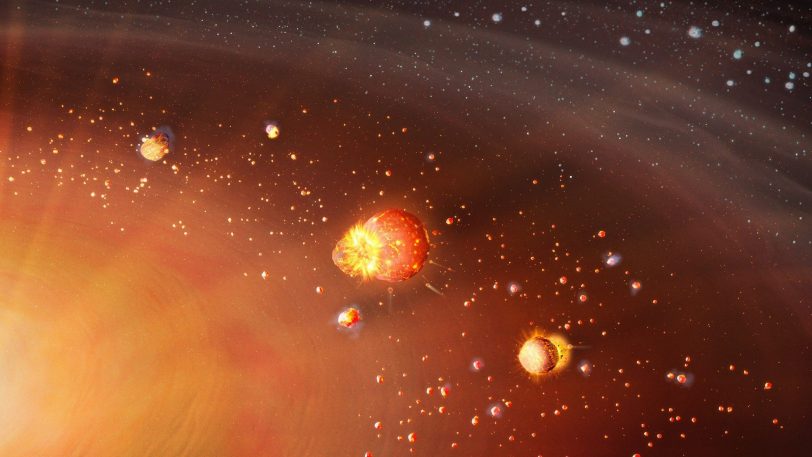 Our solar system was formed about 5 billion years ago from material left over from previous generations of stars, according to astronomers. Beyond that, however, things get a little murky.

According to popular belief, a nearby supernova explosion compressed a dense cloud of gas and dust to the point where it collapsed in on itself due to gravity. The cloud became hotter and spun faster as it condensed. The cloud’s core eventually became so hot that it started fusing hydrogen into helium, forming the star we know as the Sun.

The solar system, however, may have formed inside the dense shell of an enormous bubble within a giant star, according to a study published in the Astrophysical Journal. The research not only offers a fantastical scenario for our solar system’s formation, but it also answers a long-standing question about the chemical makeup of our solar system.

The new theory for the formation of the solar system begins with a Wolf-Rayet star, which is an extremely massive star. These stars have the highest temperatures of all the stars in the universe. They have exceptionally strong stellar winds as a result of their extreme heat.

As a Wolf-Rayet star sheds its outer layers – a normal end-of-life process for a giant star – its strong stellar winds plow through its loosely held cloak of material, forming densely shelled bubbles. According to the study, the solar system could have formed inside of one of these bubbles.

Since such a huge amount gas and dust is trapped inside, “the shell of such a bubble is a good place to produce stars,” said Nicolas Dauphas, co-author of the study and professor of geophysical sciences at the University of Chicago, in a press release. The researchers estimate that this stellar-womb process is so effective that it could account for the formation of 1 to 16 percent of all Sun-like stars.

Despite the fact that the unconventional theory may appear superfluous, the researchers proposed it because it answers a long-standing question about the early solar system: When compared to the rest of the galaxy, why did it have so much aluminum-26 and so little iron-60?

This is what brought the researchers to Wolf-Rayet stars, which produce lots of aluminium-26, but zero iron-60.

“The idea is that aluminum-26 flung from the Wolf-Rayet star is carried outwards on grains of dust formed around the star,” said Dwarkadas. “These grains have enough momentum to punch through one side of the shell, where they are mostly destroyed – trapping the aluminum inside the shell.” The bubble eventually stops pushing outward and, due to gravity, collapses in on itself. The researchers believe our solar system could have formed in this collapsing bubble.

Though the researcher’s new theory is far from being accepted, its ability to explain the solar system’s observed chemical composition will undoubtedly lead to further research. OSIRIS-REx, a NASA spacecraft, will return a sample of the ancient asteroid Bennu to Earth in 2023. Perhaps this will help astronomers unravel our solar system’s origin story?

READ MORE: You Can Finally Watch The Blast of a Cosmic Supernova With Your Own Eyes