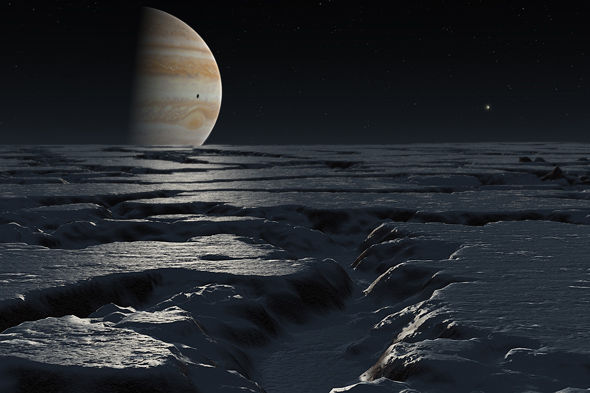 Recently processed data from NASA’s Galileo orbiter have allowed spectacular video sequences to be produced from the flyby over Jupiter’s Moon Europa.

Europa is the sixth natural satellite of Jupiter in increasing order of distance and the smallest of the four Galilean satellites.

It was discovered in 1610 by Galileo and named after Europa, the mother of King Minos of Crete and lover of Zeus.

Slightly smaller than Earth’s Moon, Europa is composed mainly of silicates and has an icy crust. It has a core that’s most likely made out of iron and nickel.

It has a tenuous atmosphere composed of oxygen, among other gases.

Its surface is ridged by cracks and rays, while craters are relatively rare.

It has the smoothest surface of any known object in the solar system.

And while Europa is far, far away from Earth, NASA’s Galileo spacecraft has allowed us to take an unprecedented peek at this beautiful alien moon.

Astronomers speculate that there is an ocean below Europa’s surface, which could meet the necessary conditions for life as we know it to exist.

The video offers an unprecedented view of the countless cracks that make up the moon’s surface.

The other video shows a flyby between the north and south poles.

It was processed using unfiltered images of Europa taken by the Galileo spacecraft between May 31, 1998, and September 26, 1998.