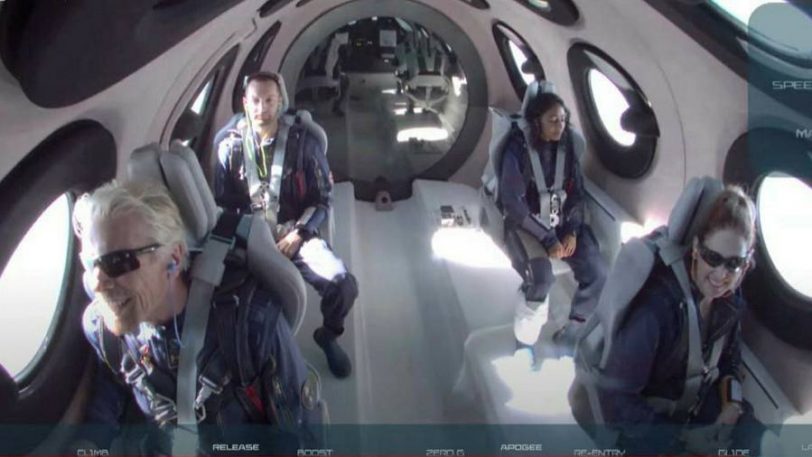 British billionaire Richard Branson successfully completed his latest, and arguably greatest, adventure with Sunday’s brief flight to the edge of space aboard his Virgin Galactic space plane. The Virgin Group’s business magnate has conquered music and air, and now he’s launched himself into space.

Hundreds of invited guests and media watched from the desert floor below at New Mexico’s Spaceport America as the double contrail drawn across the sky by carrier aircraft VMS Eve was suddenly overshadowed by a third white plume emanating from SpaceShipTwo Unity’s rocket engine. Unity separated from Eve about 45 minutes after takeoff, and its motor ignited and fired for just under a minute, reaching speeds in excess of Mach 3.

Viewed from the surface, a diffuse but distinct white line could be seen rapidly painting almost perfectly vertically, pointing quite literally to the heavens.

Branson called it the “experience of a lifetime” in a staticky radio transmission from Unity as it began to glide back to Earth. The craft then returned for a picture-perfect landing near the same spot VMS Eve launched from almost exactly an hour earlier. “Welcome to the dawn of a new space age,” Branson tweeted.

Unity reached a height of about 56 miles (90 kilometers) above the Earth’s surface. Some may object that this is less than the common definition of space, which starts at a nice, even 100 kilometers (62 miles). The dividing line was set at 50 miles up (80 kilometers) by the US military and NASA, so it’s all a little subjective. And, for the purposes of space tourism, you get to feel weightless and see our home planet set against the black void of space from either altitude.

Before taking off, Branson said he would be “looking back at our beautiful Earth and taking it all in and realizing that only 500 other people (actually it’s 570 as of Saturday) have done this.”

Elon Musk came to escort Richard Branson to his 55-minute flight into space. At his spaceport, Bronson, who will turn 71 next Sunday, arrived by bicycle.

You can see the takeoff and part of the mission here: