Home » Wonders Of The Universe » The End of the Universe: How Black Holes Die 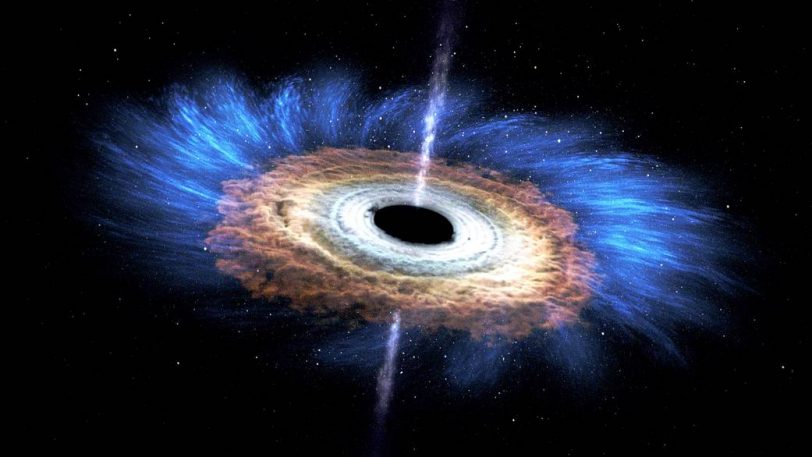 Long after the last stars fade, black holes will herald the end of the Universe with a spectacular show of fireworks.

is currently in its Stelliferous Era, when stars and galaxies are constantly being born. The ingredients used to create these objects will eventually run out, and the stars in the night sky will gradually fade away, leaving only black holes as the universe’s occupants.

Even black holes will die one day. When they do, these monsters will not go quietly into the night. In the final moments of each black hole, a burst of fireworks will light up the universe, marking the end of an era.

Black holes survive by consuming the gas and stars that surround them, and their gluttony is what gives them away. They are frequently surrounded by accretion disks of material that they have ripped apart and sucked close, like water swirling down a drain. As material approaches the black hole, it begins to travel faster and faster, piling up around it. Friction among the dust generates heat, causing the accretion disk to glow and outline the black hole’s shadow — or event horizon. “It wants to hide, but it does a pretty bad job of it sometimes,” says Sheperd Doeleman, a Harvard University black hole researcher and the director of the Event Horizon Telescope, which took the first photo of a black hole in 2019.

Nothing can escape the grasp of these gluttonous monsters, so anything that crosses the horizon of a black hole is lost forever. That is, at least, what our current understanding of gravity suggests. However, this so-called point of no return ignores quantum mechanics. (Physicists are still working on a unifying theory of quantum gravity.) Stephen Hawking demonstrated in 1974 that, from a quantum point of view, escape from a black hole is possible, although very slow.

While empty space may appear to be devoid of energy, it isn’t; quantum mechanics shows that the energy of a vacuum fluctuates slightly over time. These fluctuations appear as pairs of particles — a particle and an antiparticle — that appear and disappear throughout the universe. Because energy cannot be created from nothing, one particle will have positive energy while the other will have negative energy.

However, don’t expect a black hole to vanish anytime soon. A black hole takes an astonishingly long time to lose all of its mass as energy via Hawking radiation. A supermassive black hole would take 10100 years, or a googol, to completely vanish. “The entire age of the universe [is] a fraction of [the time] it would take,” says Priyamvada Natarajan, a researcher at Yale University who probes the nature of black holes. “As far as we’re concerned, it is eternity.”

Exactly how long an individual black hole lives depends strongly on its mass. The larger a black hole gets, the longer it takes to evaporate. “In that sense, [a black hole] can cheat death by growing,” Doeleman says.

He compares the process to an hourglass, where the sand at the top is the amount of time a black hole has left. By gobbling down more stars and gas, a black hole continues to add sand to the hourglass of its life, even as individual particles trickle out. “As long as there is material around [to eat], the black hole can keep resetting its clock,” Doeleman says. Eventually, as the universe ages, the material around a black hole will run out and its doomsday clock will start ticking.

As a black hole evaporates,

it slowly shrinks and, as it loses mass, the rate of particles escaping also increases until all the remaining energy escapes at once. In the final tenth of a second of a black hole’s life, “you will have a huge flash of light and energy,” Natarajan says. “It’s almost like a million nuclear fusion bombs going off in a very tiny region of space.”

By Earth’s standards, that’s a lot, far more than all of the world’s nuclear arsenals combined. Not so much in astronomical terms. The most powerful supernova ever recorded (ASSASN-15lh) was 22 trillion times more explosive than the final moments of a black hole.

It doesn’t matter how small or how massive a black hole is, their closing fireworks are exactly the same. The only difference is how long it will take a black hole to explode. But once a black hole gobbles down its last meal, all that’s left is for the sand grains to relentlessly tumble down until there’s nothing left.

READ MORE: NASA: Something Come Out Of A Black Hole For The First Time Ever